Notice to South Africans: Please visit sacoronavirus.co.za for up to date information on the COVID-19 outbreak. 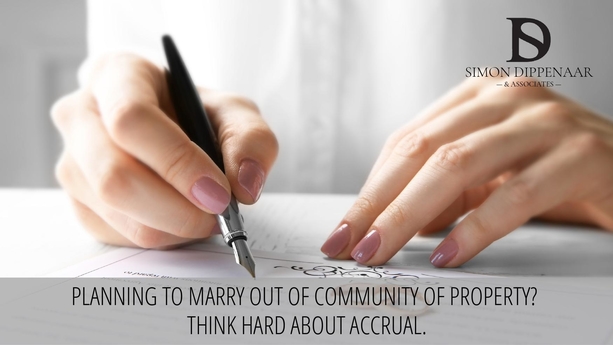 Also known as a Prenup, an Ante Nuptial Contract is designed to protect the legal interests of both partners and is the basis on which to start building a solid financial future.

Without a marriage contract all assets belonging to both partners are joined into one estate and all profits or losses are shared with a 50/50 split. This means that should you divorce assets are divided equally, but also that any loss, debt or insolvency is also shared by both partners and in the event of death the surviving partner is not protected.

An Ante nuptial contract is a defence to protect both partners from any financial disasters that may occur, not, as is often assumed, as a measure of defence because one partner doesn’t trust the other.

A variation on the marriage contract is Ante Nuptial with Accrual. This contract combines the traditional marriage with a contract, meaning that whilst any asset you had before marriage remains yours, both partners are entitled to a 50/50 share in the estate growth of the combined estates that occurs during the marriage. The accrual is only calculated during divorce or after one partner dies.

An Ante Nuptial Contract with Accrual is often used by partners where one is not employed due to raising a family or any other non income generating activities.